Waiter’s job is not easy. They are busy all the time and tire a lot.

But Dylan Tetil found time to talk to an elderly man who always had lunch alone in the cafe where he worked.

Dylan had noticed that the man came here every day and sat in the same chair.

One day when the man finished eating and got up to leave, Dylan approached him.

A young girl, named Lisa, sat not far from the elderly man.

When she saw the waiter kneel down in front of the old man, she was very surprised.

But soon, she understood Dylan’s intention and started taking pictures of this delicious scene. 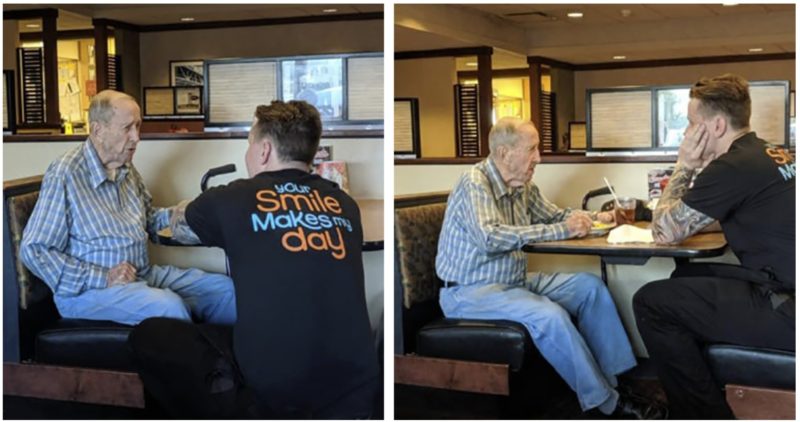 It turned out that the elderly man was named Doug Parker and was 91 years old. He was a veteran of World War II where he had lost his hearing.

Doug explained that he left his hearing aids at home.

He said he came here because it was the only place he found his favorite sandwich that didn’t hurt his stomach.

The veteran told some episodes of the war and his personal life.

Luckily there weren’t many customers in the cafe and the waiter listened to his story very carefully and with pleasure.

Then the old man apologized for having talked a lot. He explained that he lived alone and there was no one he could talk to.

Dylan was moved and realized that this conversation meant a lot to Parker.

Lisa shared her photos taken on social networks and in their comments people thanked the kind waiter for his kindness and understanding.