Wilma Wong is a nurse who works in a children’s hospital. She is originally from Nicaragua who moved to the United States when she was 16.

In the United States, the girl became a nurse in the field of pediatrics and began her career in a hospital.

She is very fond of her profession which requires dedication and love towards her work. During her medical career, she cared for many newborn babies that she remembers so far.

After graduating from school, a young doctor came to join the hospital where Wilma had worked for years. One day, the nurse held a conversation with the doctor.

When Wilma learned his name, it sounded very familiar to her, and the woman remembered an incident at the hospital when she was young. Wilma interrogated the doctor asking if her father was a policeman.

The young specialist asked if she was Wilma.

Then, something fantastic happened… Yes, it was Wilma and this doctor was the premature baby, born 28 years ago in the same hospital!

The doctor said his family told him the story of his birth and a young nurse took care of him and watched by his side all night. They even had an old photo that they kept carefully, the image of Wilma and that of a newborn baby in her arms. 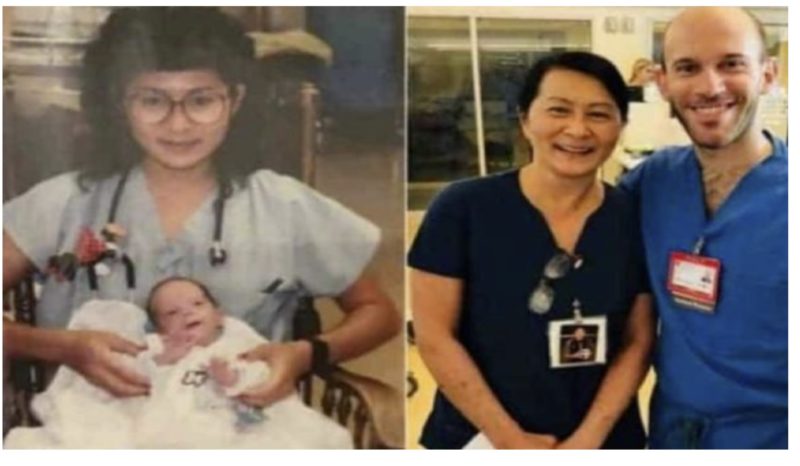 The doctor couldn’t hold back his tears. During all these years, he wanted so much to meet the nurse in this photo. And now his dream has come true.

The young specialist is lucky to work with such a dedicated nurse like Wilma Wong.